Wholesale energy costs, which make up between 45% and 55% of a company’s energy bill, can jump around significantly from month to month and year to year. Utility Helpline tracks these price movements in the market reports section of our website. If your fixed-term business energy contract is coming to an end, you might be wondering why the renewal price is cheaper or more expensive. In this blog post we will explain some of the factors that influence wholesale energy prices. 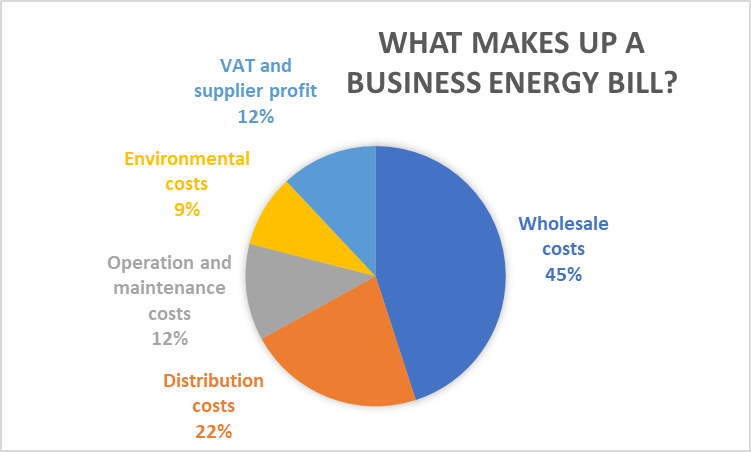 Wholesale energy prices are influenced by a wide variety of factors. To fully appreciate the complex interplay of factors, you need to know a bit about wholesale energy markets. Gas and electricity are bought on the wholesale market from power stations, gas producers and importers. Some energy is bought on a short-term basis to meet additional demand, but more is bought in advance. Energy that is bought in advance is bought on different and at different prices. This is called hedging and energy companies do it to help smooth out price fluctuations. If wholesale gas or electricity prices fall or increase, the change won’t be perfectly reflected in the unit prices paid by businesses. But it is a good indication of which direction the market is heading. Below, we look in more detail at some of the factors that influence wholesale energy supply.

Supply and demand is the basic relationship that determines the price of any commodity in economic theory. When the price that a producer is willing to sell equals the amount of energy that businesses are willing to buy at that price, an equilibrium or market price is established.

On the diagram, the price (P) and quantity (Q) of a commodity is set where the demand and supply lines intersect. Many of the other factors that we will discuss can be understood with reference to this basic graph. Some factors - like geopolitical events or disasters - will limit the supply of energy, shifting the supply curve to the left and increasing prices. Other factors – like extremely cold temperatures – will increase demand, pushing prices up.

If the demand for energy increases then the demand curve will shift from D1 to D2, increasing the market price from P1 to P2. The energy market isn’t perfect and energy buyers aren’t completely rational, but the relationship does illustrate how supply and demand changes influence price.

Britain used to be able to make all its own gas. But as North Sea gas reserves have dwindled the country has had to start importing more natural gas. To keep the gas system well supplied, the UK must pay at least as much as European countries in order to attract gas through pipelines. When there is a shortage of gas, the market price can increase significantly. These shortages can occur when pipelines or gas fields go offline. This isn’t too problematic if a gas field goes offline for scheduled maintenance, because other sites can pick up some of the slack. But unplanned maintenance can throttle supply and lead to large short-term price increases. Recently, the UK has started receiving more shipments of liquefied natural gas (LNG). Because LNG is delivered on large tankers and dumped into the marketplace quickly, it can lead to a glut of supply and drive short-term prices downwards. Because a significant proportion of UK electricity is generated from gas-powered power stations, changes in the price of gas are often reflected in the wholesale price of electricity.

Gas storage facilities minimise short-term price fluctuations, putting gas to one side when demand is low and redistributing it when prices rise. Centrica closed down Rough - the UK’s largest gas storage site - In spring 2017. This reduced the country’s gas storage capacity from a total of 15 days to just four or five days in the winter. Centrica closed the site because the difference between gas prices in summer and gas prices in winter got smaller, so the returns on storing gas for a season reduced. But it also removed an important function that moderated short term prices when demand was high. This vulnerability was laid bare in 2018 when the Beast from the East triggered a gas shortage warning, driving wholesale gas prices to their highest level in a decade. Since then, several experts have urged the UK to reconsider its approach to gas storage. But the Department for Business, Energy and Industrial Strategy (BEIS) has repeatedly said that the UK can attract enough gas supplies through pipelines and LNG tankers. The UK started 2019 with healthy storage levels and mild weather across Europe and China has led to more supply in the UK.

Like other internationally traded commodities, gas and electricity can be affected by currency fluctuations. Because a good deal of Britain’s gas comes from Europe and because electricity prices are linked to gas prices, the price of gas and electricity in Britain is influenced by the pound’s strength relative to the euro. If the pound is strong against the euro, then prices tend to fall as gas and electricity become cheaper. If sterling is weaker, prices tend to rise. With uncertainty relating from Brexit, the Great British Pound has taken a hit. This may recover if Britain exits from the EU smoothly.

Britain is the world’s biggest offshore wind generator, making up almost 40% of global capacity. On and offshore wind turbines accounted for 17% of the UK’s power needs in 2018. And this is likely to increase. The government plans to generate a third of its electricity from offshore wind farms by 2030. Wind makes up a significant portion of the UK’s electricity mix on windy days. But when the wind doesn’t blow, more natural gas is diverted to power stations, increasing prices. Increasing reliance on wind turbines means that an extended period of no wind could make the gas price skyrocket. 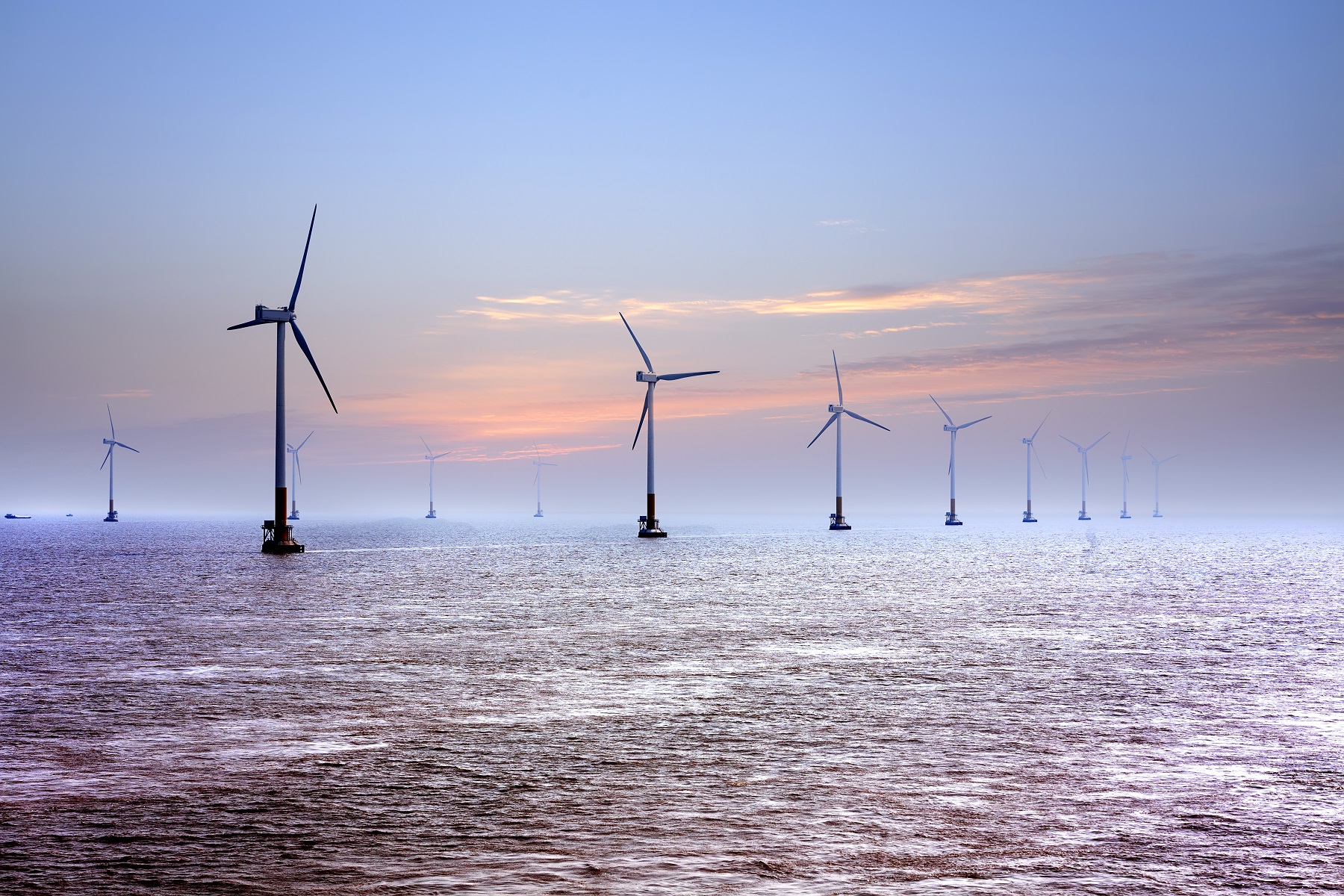 This one is obvious. When the temperature goes up, the demand for gas and electric heating is lower. Likewise, if temperatures fall then the demand for gas and electricity can go up, increasing prices. Because wholesale gas and electricity are predominantly bought in advance, the prices are often linked to forecasts. If a ten-day forecast suggests that there will be particularly good weather, then short-term forward prices are likely to fall. Long term temperature forecasting is more difficult. But there are some loose indicators. The El Nino weather event, for example, will typically occur once every few years and is linked to a heightened risk of a cold winter in the UK. A strong El Nino event can trigger slightly longer-term price rises.

Carbon pricing – the practice of putting a price on carbon pollution – is designed to bring down emissions and drive investment in cleaner technology and practices. Economists agree that carbon pricing is the most effective way of reducing greenhouse gas emissions. Under the EU Emissions Trading System, only certain heavy industrial businesses must pay the carbon price, but this list includes power generators, which pass the cost of carbon down the supply chain to individual homes and businesses. The EU ETS works on a ‘cap and trade’ principle. This means that the EU caps the total amount of certain greenhouse gases that can be emitted over time. Companies buy or receive emissions allowances which they can trade with one another as needed. The price of carbon can vary week by week and month by month, but as the total number of allowed emissions is reduced, the permits are becoming more valuable. Since changes were made to the market in 2017, prices have had a sharp upward trajectory.

The price of EU carbon emission permits quadrupled in the 12 months after the reform was introduced – making a much bigger impact on companies. Research from Carbon Tracker suggests that EU carbon prices could double by 2021 and quadruple by 2030 if the European Commission legislates to align current emissions targets with the Paris climate agreement. Coal and gas power plants are particularly at risk and have seen their business costs increase dramatically in recent months. The price of carbon will probably continue to rise in the future, but more green investments will make the price of carbon less relevant.

Oil prices are heavily influenced by global events, which have a knock-on effect on gas and electricity prices. Conflict or a natural disaster in a country that produces oil or gas will limit production and accessibility, pushing up prices. With falling reserves in North Sea gas fields, Britain has grown more reliant on imported gas during the last two decades. Since 2004, Britain has imported more gas than it has produced, meaning that it is more exposed to global events that affect availability. The 2011 conflict in Libya pushed oil prices to a two-and-a-half-year high, while the Fukushima nuclear accident increased Japanese demand for LNG, increasing prices. More recently, a political crisis and U.S. sanctions in oil-producing Venezuela has caused the price of oil to rise, with a knock-on effect on gas and electricity prices.

Wholesale energy prices are down, why are my bills still the same?

Most business energy deals are supplied on fixed-term contracts. This means that a business will buy energy at a fixed unit rate for up to five years. Often the only way to find a cheaper deal is to switch suppliers or try to negotiate a cheaper deal at the end of the minimum contract period.

But collecting quotes for business energy can be complicated and expensive. Business energy contracts are more detailed than domestic contracts and online comparison services aren’t particularly reliable. Businesses can’t secure ‘dual-fuel’ deals either, so they need to negotiate for their gas and electricity supply separately. Because switching is more complex, many small and medium-sized firms don’t engage with the market and sometimes find themselves rolled over onto a worse deal. The easiest way to switch your energy is by using a specialist business energy broker like Utility Helpline. An energy broker will collect quotes from dozens of suppliers and offer advice on rates and pitfalls with certain companies. They will also be in touch throughout your contract period and will make sure that you don’t roll over onto a bad deal. Utility Helpline energy brokers will also help you choose a fixed-term contract length that suits your business, giving you certainty over your budget and saving money if wholesale prices rise during the contract term.

Want to learn more about Utility Helpline’s range of energy procurement services? Speak to a member of the accounts team today. Call: 0800 043 0423.