Oil saw a quieter week last week, but other energy prices swung wildly. Following a recent climb, oil prices began to level out after breaking the $70 per barrel level. This seemed to prove a psychological barrier for traders worried about prices gaining too quickly. US storage levels continued to fall, but concern about increased US shale output prices kept prices steady. New shale oil drilling rigs suggest that shale output will continue to rise. Russia poured more cold water on oil prices by signalling that their limited production pact may come to an end earlier than expected. This is in spite of OPEC, where the adherence to production cuts remains firm. In sum, Brent closed the week down 1.7% at $68.61 a barrel. 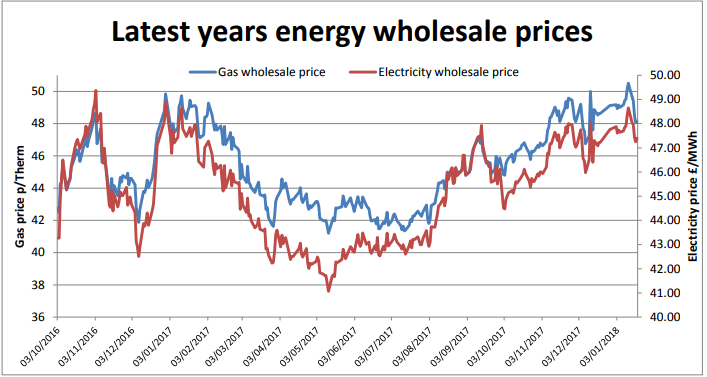 In the UK, gas demand dropped on a well-supplied system as warmer temperatures spread across the UK. Demand was below seasonal norms for much of the week as strong wind output restricted power station demand. But the price slide was brought to a halt on Friday when unexpected outages affected North Sea supply. With milder weather forecast for the rest of January, demand-side pressure came off prices just as two LNG cargoes arrived on British shores. Electricity prices tracked with gas - with record wind output two days in a row contributing to generation output and displacing fossil fuel-fired plants. Good availability of all generation kept margins healthy. With oil out of the equation, the focus in the UK was on trading fundamentals. All contracts saw big losses last week, reversing most of the gains made since October. The biggest falls were seen on longer-dated contracts from 2020 onwards but 2018 and 2019 contracts saw 2.5% and 4.5% falls on electricity and gas respectively. Prompt prices for February and March also fell sharply. With the weather forecasts changing weekly, prices seem to be on a rollercoaster. Clients should continue monitoring markets closely and be in a position to contract quickly if the opportunity arises.