The energy markets were highly volatile last week, with the energy complex moving around. Although oil was contained across a narrow price range and lacking in clear direction, Euro carbon prices crashed at the beginning of the week but then rebounded hugely by Friday. This, in turn, had a violent knock on effect on energy prices, with electricity feeling the brunt of it due to its over-dependence on fossil fuels such as coal. There were continuing concerns over European gas storage volumes and, in fact, levels are currently 4 billion cubic meters below those at this point in 2017. Sterling recovered slightly through the week after some much-needed positive Brexit news. Brent finished at $78.09 per barrel, a rise of 1.6%.

Back here in the UK, following annual maintenance work, there was a resumption of service for North Sea gas assets and this helped normalise the system. Although there was in increase in gas flows to Britain, the high demand kept up pressure on prices. Reduced wind output towards the end of the week boosted demand for power station gas which in turn affected electricity prices. However, the volatile carbon prices affected them much more and wholesale prices moved 3% to 4% each day through the week. Last week we saw losses across all contracts, however, electricity was the worst hit. The recent reductions in gas supply fuelled concerns regarding how Europe will be able to cope this winter and this is reflected in how high winter 18 prices are. Despite the recent, slight uplift, Sterling is still quite weak against the Dollar and the Euro, so when the autumnal drop in temperature arrives, pricing direction will likely be affected by the seasonal weather patterns. We will have to see how much pressure is brought on from a cold winter and the impact by possible Brexit-related currency swings. 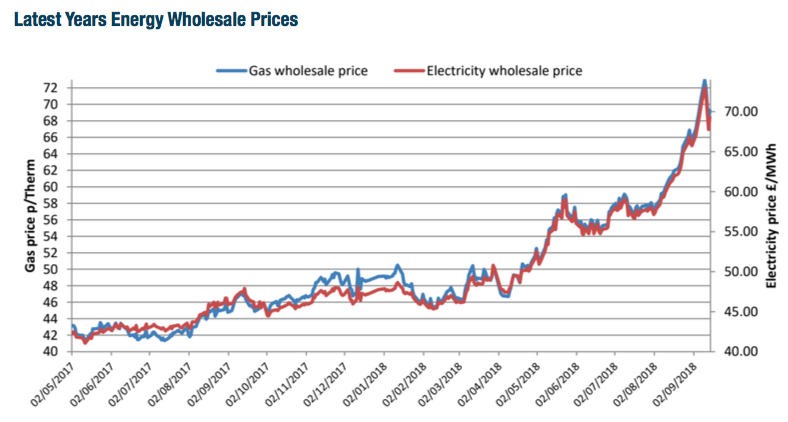