Prices continued to rise last week as bad news continued to pile up. Oil prices hit a three-year peak as fallout from the United States’ decision to pull out of the Iran nuclear accord was compounded by rising international demand and falling output in Venezuela. These geopolitical concerns, along with a further fall in US storage levels kept traders on their toes despite US production remaining at a high level. European prices remain stressed out, with prices influenced by a high demand for gas and the start of maintenance season on North Sea supply assets. Brent closed the week up 1.9% at $78.51 a barrel. 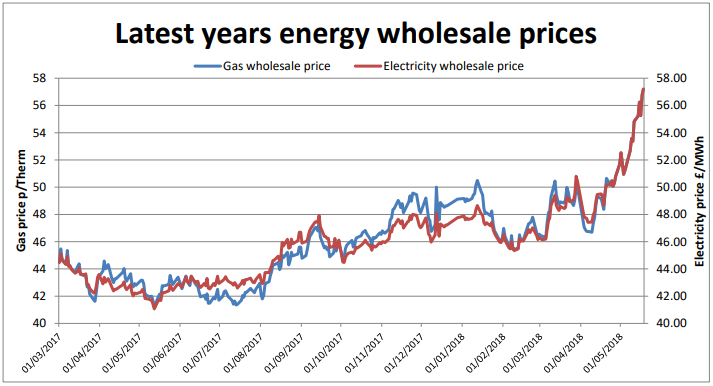 In the UK, short-term prices were driven up again by problems with North Sea gas assets at Kvitebjorn. This resulted in reduced flows into the UK and required storage to be released. This was in spite of the warm weather which reduced gas demand. Increasing coal and oil prices lead to increased wholesale gas, especially in the longer term. Renewable output was healthy, but electricity prices were forced up again by rising gas and coal prices. All contracts saw substantial rises last week as the geopolitical turmoil continued. Rises were between 3 and 5% on the week, with gas seeing larger rises and winter 2018 being especially pressured. Prices for contract starts before October also saw similar rises. Short-term drivers remain the concern over whether European gas storage can be replenished before the winter (especially for Winter 2018 prices) and the start of maintenance season in the North Sea taking assets out of use. Longer term pricing is still being driven by oil and coal rises. Coal is pressured because it may have to replace gas generation this summer as gas is injected back into storage. Large drops in price seem unlikely for a while until some ongoing concerns about storage remain unaddressed.