After recent volatility, markets cooled down last week. Business prices for wholesale gas and electricity barely moved as traders looked for clear direction. The United States agreed to allow eight countries to continue buying oil from Iran, which led to some small price dips. Saudi Arabia and Russia also pumped out record volumes of oil and US storage volumes grew again. So all supply-side pressure was downwards. European carbon and coal prices were volatile over the week, seeking spikes and dips. Brent closed the week down 3.6% at $70.18 a barrel. 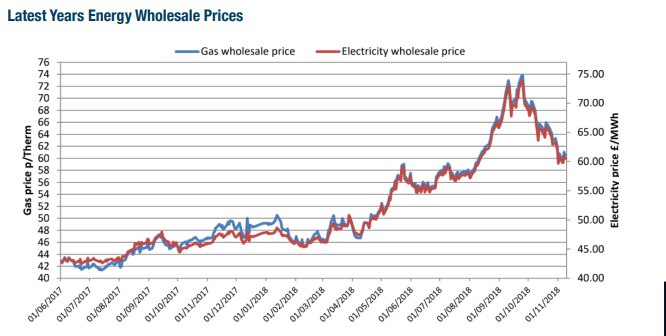 In the UK, mild weather meant that the gas system stayed well-stocked. Good wind output also reduced the gas demand at power stations – meaning that some gas could be siphoned into much-needed storage. More LNG cargo ships are expected, which put pressure on the curve. Prices spiked on Thursday when a Norwegian naval vessel hit an oil tanker and resulted in the temporary closure of a large plant that supplies the UK. But flows were reinstated quickly. Electricity prices followed gas prices near enough, seeing a little more volatility thanks to fluctuating carbon prices. Contracts were steadier than last week. Only 2019 and 2020 electricity prices saw any significant movement. Driven by changing carbon prices, electricity prices jumped around more than gas. Gas prices for the remainder of the winter fell a little more but electricity stayed stable. Continued mild weather appears to be keeping the cold weather price risk at bay, at least for now, as the gas system continues to cope. The weather is relatively benign for now, but as we enter a critical period in the final Brexit negotiations, the market is likely to be characterised by even more risk. Those willing to take on risk with renewals next year may want to see how things play out but this market remains volatile.