Wholesale energy prices fell again last week as more risk was sucked out of the market. Ongoing gas supplies remain healthy across Europe and a dip in the price of coal both contributed to downward pressure. The price of oil stagnated somewhat as opposing factors competed for dominance. In his State of the Union address, President Trump rightly claimed that the US has become the world’s biggest supplier of crude oil. And US oil production is still rising. But the effect of these increases were offset by OPEC’s pledged production reductions and ongoing political problems in Venezuela. The pound took another hit last week, which prevented any further price falls. Brent closed the week down 1% at $62.1 a barrel. 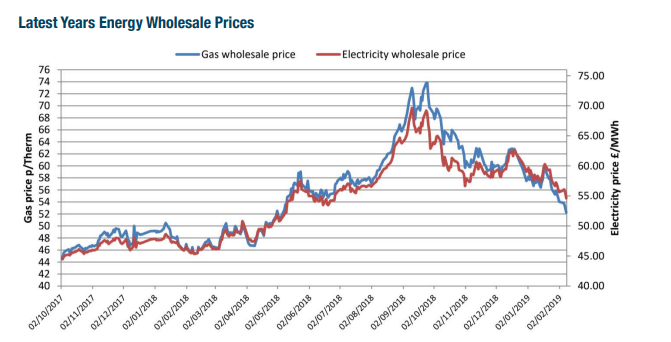 Minor unplanned outages at gas stations in the North Sea were not enough to upset the system. Gas continued to be well supplied. Coupled with a milder weather forecast for the next week, this helped reduce wholesale prices in the UK. Continued LNG deliveries put downward pressure on prices. And little sign of an imminent cold snap before winter helped keep prices down. Strong wind output and good electricity output helped keep short term electricity prices down. Strong winds also soothed gas prices, because natural gas wasn’t needed for gas electricity generation. European coal prices also fell, but carbon did see a slight rise due to increased buying interest. Overall, all contracts saw slight dips again last week as more risk was subtracted from the pricing equation. Short term gas prices saw the biggest falls. As we drive further into the winter, the risk of any sustained cold weather decreases. But the effects of Brexit are still relatively unknown. A no deal Brexit scenario could have a big impact on wholesale gas and electricity prices, for example. Risk-averse clients may wish to start looking at new contracts to remove this risk. But prices may still fall further for those willing to take on extra risk. For more information or advice on purchasing energy, speak to a member of our team. Call: 0800 043 0423 or click to get a quote.