Summer 2018 contracts have now expired, so prices show the next 12-month contract from October 2018 to September 2019. Markets started to retreat last week as tough European weather eased off slightly, while political uncertainty kept some pressure on. Thin trading on the short week forced markets to lose of their ground and European weather forecasts became more moderate. Oil markets showed plenty of volatility as tensions between China and the United States rose and eased and rose again. There was a further draw on US storage volumes. Brent closed the week down 3.2% at $67.11 a barrel. 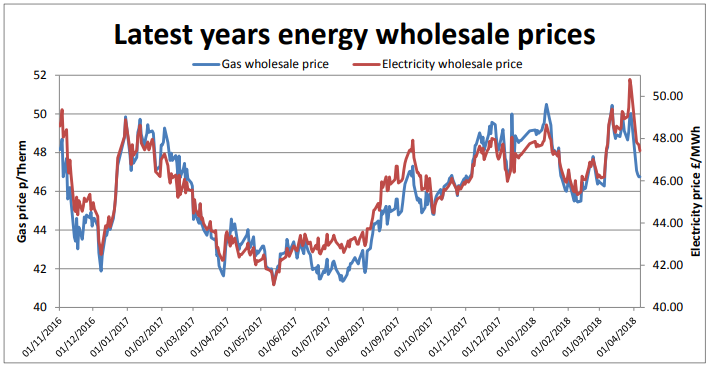 In the UK, improved weather forecasts for the rest of April eased concerns about limited storage. Plentiful LNG cargo deliveries served to reassure traders. A shipment from a new US facility also soothed markets. With demand down, the system coped reasonably well after recent highs and exports arriving from the continent. Good renewable output saw gas demand fall and electricity prices were also quiet, taking their lead from gas. All contracts saw losses last week, as the prompt year has not moved to winter 2018 and summer 2019, the price falls so falsely high against the old 2018 contract. The falls on the 2019 contracts are realistically around 1.5%. Prices for contract start before October 2018 saw significant falls as immediate weather forecasts for April and May. Long-dated contracts showed more moderate falls, held up by coal and carbon. The weather is still likely to dominate for some time as prices start to ease on a milder forecast.