Prices were yo-yoing for most of the week but settled as falls. The unusual cold snap prompted rises at the beginning of the week but, by the middle, they’d gone the opposite way. The early week saw oil rose with the expectations that OPEC would be continuing their production cuts, only to drop again in the middle of the week when US storage figures showed another drop in oil. However this was offset by further gains in petrol / diesel stocks, serving to highlight that the ongoing OPEC cuts are not working. Brent ended the week up marginally at $52.05 per barrel.

The European cold snap affected temperatures and therefore gas demand in the UK, inflating prices at the beginning of the week, although the system was long. By the middle of the week, temperatures had returned to normal, but maintenance work carried out at the Karsto gas plant in Norway shortened the system, with prices jumping back up. Although the system remained short by the end of the week, the strengthening Pound saw prices drop again. Electricity tracked the gas prices for most of the week. However, as renewables output is likely to dip next week, a premium was factored in. 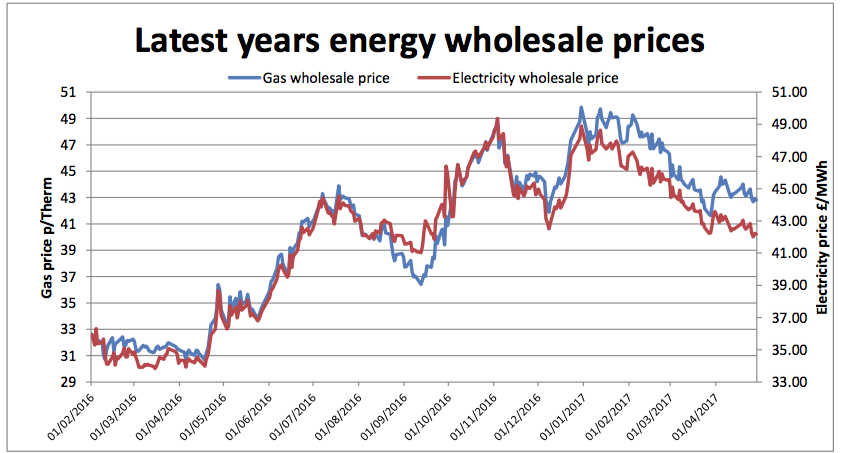 The energy outlook for May

Gains followed by losses culminated with all contracts down 1 to 2% by the end of the week. There is still some risk inherent in the market but May's OPEC meeting should give some clarity as to where the market is going. UK gas availability for this winter is unknown at this stage with rough storage unavailable. Therefore prices are likely to be more dependent on European gas and imported LNG prices. We still recommend those less inclined to risk to consider their contracts now. There will probably be continued volatility and there may be improved prices through the summer IF there are plenty of gas supplies. However, those clients who don't mind some risk will still need to watch the markets closely and steel themselves for possible fluctuations.