The week ending 6 January brought slight price falls across the market. It was another shorter trading week with a bank holiday towards the start of the week and could be categorised as a 'wait and see' week as traders watched closely for the OPEC production cuts that are widely anticipated. The Pound continued to fall against the Euro and the the US Dollar, but milder weather forecasts for the end of January tempered currency driven price rises. A court ruling in the Netherlands rejected a protest to shut down the colossal Groningen gas field that has been linked to some small earthquakes in the last few years. If this field was shut down it could have led to a large spike in prices. Brent closed the week up 1.7% at $57.10 a barrel. 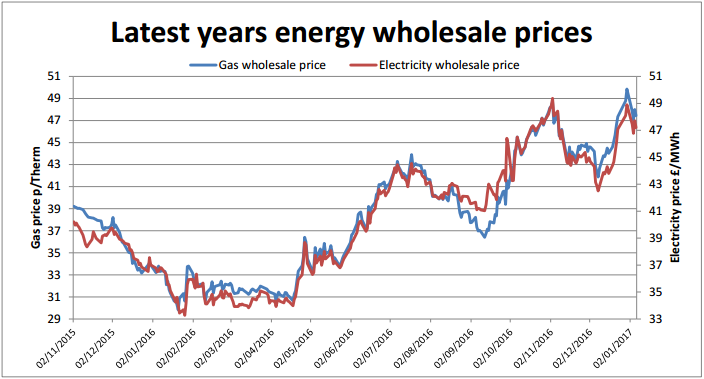 In the UK, the gas system was long for much of the week, with large withdrawals from storage. Coupled with warmer forecasts for the end of January, this eased any pressure on prices. With no big news coming from the electricity markets, good renewable generation and no generation outages, electricity prices also tracked downwards. Contracts saw a sharp decline of between three and six percent at the end of the week. Longer contracts saw the sharpest declines. Prices lost some of their recent gains as the market adjusted for promised OPEC cuts. If and when these materialise, oil prices could easily top $60 a barrel. This would push energy prices considerably higher. If the cuts don't materialise, oil prices could drop back down to below $50. With the worst of the cold weather seemingly in retreat, markets are poised on OPEC news. Risk averse clients may still want to consider contracting sooner to avoid potential rises.