‘Dry January,’ which has just recently received backing from Public Health England, has become something of a tradition for Brits worried that they’ve overdone things a little at Christmas time. Last year the Campaign for Real Ale (CAMRA) warned that a quiet January period could be the ‘nail in the coffin’ for dozens more cash strapped pubs, which already close at a rate of around 30 per week. Even more worryingly, new guidelines handed down from the UK’s chief medical officers last week say that we should not be consuming more than 14 units of alcohol (about six pints of beer) per week. These draconian guidelines and social media fads like ‘dry January’ and ‘Go Sober for October’ risk damaging the nation’s pub and beer industries beyond repair. The British beer industry contributes £19 billion to the UK economy and 500,000 people work in the nation’s pubs. But if Britain’s pubs closed then the biggest losses would not be financial. Pubs have been a cornerstone of British communities for centuries – a place for people from all walks of life to meet and converse on a completely equal footing. Sadly, the emerging gastro-wine-bar scene doesn’t have this community feel.

We have put together a list of seven tips to help British pubs survive dry January and thrive in 2016.

To survive a quiet January, pubs need to prove to their customers that giving up alcohol doesn’t have to mean giving up the pub. Rethink your soft drink selection and place them higher up in your drink chillers. When people ask for a coke you could ask your staff to upsell more premium fizzy drinks instead of heading straight for the Pepsi pump. If you want to be really adventurous then you could even train your staff to make mocktails or milkshakes. As much as you try to upsell soft drinks, some drinkers will not give up their pints. So why not offer them something new? Non-alcoholic beers have a bad press, particularly among seasoned drinkers. But the quality of 0% beers has increased significantly in recent years. Increased demand for alcohol free booze in countries like Spain and Germany has prompted some producers to invest in their product and most think it will only be a matter of time before the micro trend catches on here in the UK too. Adaptability is king in an ever changing hospitality market. And while some landlords might shirk at the thought of becoming a kind of bar-café hybrid which has stolen so much of the traditional pubs trade, it is a good way of attracting customers during the daytime when a pub might otherwise be quiet. Invest in a good coffee machine and supercharge your WiFi and you might be successful in tempting some of the madding crowd from Starbucks. People participating in Dry January obviously like the idea of getting healthy. And pubs, as important community meeting spots, are well placed to make this happen. As gyms get packed up in the New Year - and people begin looking for other places to work out – your pub could be the perfect location. One simple way of attracting fit seekers is recruiting some joggers to join a running club that meets at your pub and you might be able to convince them to pop in for a pint afterwards. Again, your pub can demonstrate its worth as a community cornerstone by putting on evening classes and workshops for those who want to upskill in 2016. Whether it’s letting out a function room to a dance teacher or yoga instructor, or finding a foreign languages tutor willing to teach people once a week– there are any number of ways you can encourage keen punters through the door. Over the last couple of years, pubs have responded dry January with their own ‘Try January’ campaign. Try January involves encouraging people to get more adventurous and try new food and drink in the New Year. Try mixing up your dry and wet menu and upsell premium items like bespoke cocktails, imported beers and exotic food items. This tip isn’t exactly earth shattering, but offering heavily discounted food in January is a good way of drawing in the punters. Try offering something that you wouldn’t normally offer – perhaps a ‘small plates’ menu for people looking for a quick bite. You could incorporate #TryJanuary by offering customers new and interesting dishes and platters at heavily discounted prices. Social media promotion can help your January campaign get off the ground. If you want Utility Helpline to help promote some of your special offers and deals on Twitter then tweet us using the hashtag #UHLspecials and we will happily retweet you.

Utility Helpline work with hundreds of independent pubs and PubCo’s across the UK. We help pubs keep their doors open by cutting their energy prices and helping them to use energy more efficiently. To find out how we can help reduce your pub’s energy bills speak to our accounts team on: 0800 043 0423. 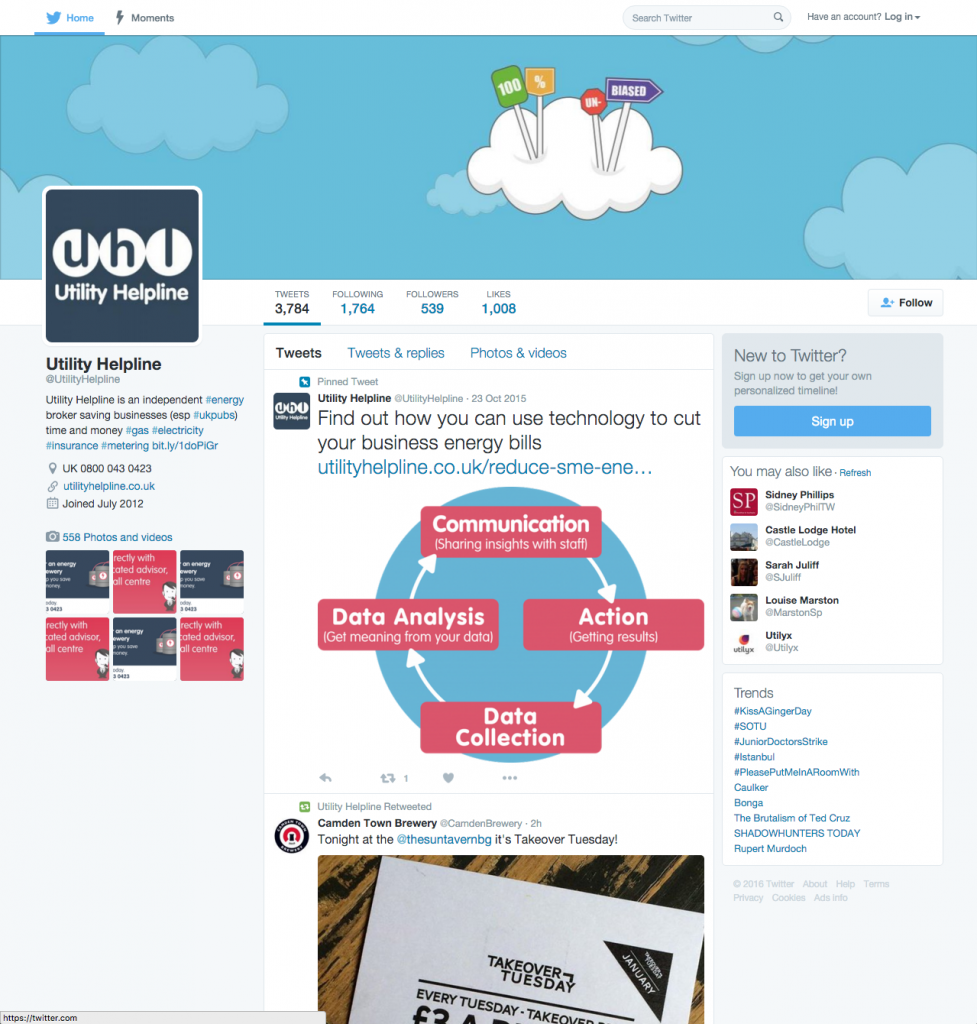