We have already written once this year about the likelihood of a topsy-turvy 2017 in terms of energy prices and there already seems to be some truth behind this. Two of the biggest business energy price drivers from this week concern the impact of OPEC globally and the capability of Ofgem in the UK. Here’s a brief summary of both drivers.

Is OPEC losing its grip on global oil prices?

Oil prices are linked to the energy prices that UK firms pay. Following its attempt to drown the market in oil for the last couple of years, which has led to cheap energy prices, the oil cartel is now trying to cut production. But question marks have already been raised about the viability of their production cut deal and how much control OPEC still has over international oil prices. The International Energy Agency described the deal between OPEC countries and 11 non-OPEC producers as in a “probation period.” They say that it is still too early to tell whether the deal will be successful. This came after OPEC announced that 50 per cent compliance with the cuts would be “acceptable,” after Saudi Arabia cut more than agreed. The impact of any OPEC cut could be limited by production increases in non-OPEC countries. One of the key aims when OPEC flooded the market two years ago was to make shale production in the United States economically unviable. In this sense the cartel only enjoyed limited success. US shale production has increased significantly since the six-month OPEC production cut was announced. And it isn’t just in the US. The IEA now predicts that non-OPEC countries will add 380,000 barrels of capacity per day. Crucially, this figure includes the promised 558,000 barrels per day that 11 non-OPEC countries promised in conjunction with the oil cartel. Countries like Brazil and Canada who aren’t included in OPEC’s grand bargain will be a big part of this.

Against a backdrop of wholesale energy price increases, energy regulator Ofgem has warned British energy suppliers that they need to swallow some or all of the price increase, rather than passing it onto domestic and non-domestic customers. The warning shot came after Ofgem published a new Supplier Cost Index which tracks ongoing trends in the main elements of costs that energy suppliers face. 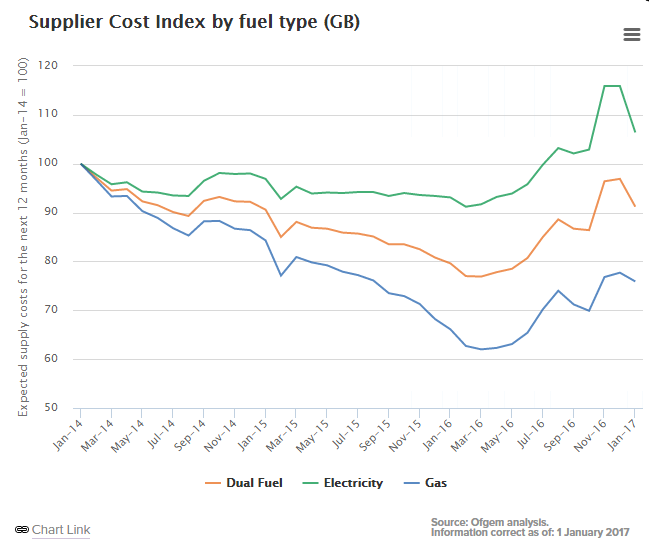 Graph courtesy of Ofgem. The latest data shows that supplier’s costs were much higher at the start of this year compared to a year previously. But Ofgem’s chief executive Dermot Nolan believes that there is no excuse for price rises because suppliers should have insured themselves against cost increases. "It's not obvious that there should be significant price increases across the market", he said. Energy suppliers, and particularly the big energy suppliers purchase energy up to 18 months in advance. And if they have hedged their purchasing against price increases then the impact of any wholesale price increases should be softened. Nolan also attacked the ‘rocket and feather effect,’ which sees the energy companies increase prices sharply in line with wholesale cost rises, but reducing them very slowly relative to wholesale drops. “The key point energy companies make about hedging is that if costs are falling, you cannot expect retail bills to fall as quickly because they smooth out the market impact on bills. But it works the other way, too,” he said.